Kubernetes cluster networking can be more than a bit confusing, even for engineers with hands-on experience working with virtual networks and request routing. In this post, we will present an introduction into the complexities of Kubernetes networking by following the journey of an HTTP request to a service running on a basic Kubernetes cluster.

We will use a standard Google Kubernetes Engine (GKE) cluster with two Linux nodes for our examples, with notes on where the details might differ on other platforms.

Take the typical example of a person browsing the web. They click on a link, something happens, and a page loads.

We need to fill in those question marks a bit.

In the next diagram, the request gets sent through the Internet to a very large cloud provider, then to a Kubernetes cluster hosted in the cloud provider’s infrastructure.

As we zoom in closer to the Kubernetes cluster, we see a cloud provider load balancer feeding to a Kubernetes Service resource, which then routes requests to pods in a Kubernetes ReplicaSet.

We can deploy the following YAML to create the Kubernetes Service (svc) and ReplicaSet (rs):

These manifests should result in the creation of two pods as part of the hello-world ReplicaSet, and a hello-world service resource with an external-facing load balancer, if the cloud provider and cluster network supports it. It should also create a Kubernetes Endpoint resource with two entries in the host:port notation, one for each of the pods, with the pod IP as the host value and port 8080.

On our GKE cluster, querying these resource types with kubectl returns the following:

For reference, our cluster has the following IP networks:

We are now ready to follow the request’s journey into the Kubernetes cluster, beginning at the load balancer.

While Kubernetes, both natively and through ingress controllers, offers a number of ways to expose a service, we will use the standard Service resource of type LoadBalancer. Our hello-world service needs a GCP network load balancer. Every GKE cluster has a cloud controller, which interfaces between the cluster and the API endpoints for GCP services needed to create cluster resources automatically, including our load balancer. (All cloud providers offer different classes of load balancers with varying options and characteristics.)

To see where the external load balancer fits in, first we need to look at the cluster from a different viewpoint.

kube-proxy in our GKE cluster runs in iptables mode, so we will look at how that mode works.

If we look at the hello-world service we created, we can see that it has been assigned a node port (a network port for the node’s IP address) of 30510. Dynamically-assigned ports on the node network allow multiple Kubernetes services hosted in the cluster to use the same Internet-facing port in their endpoints. If our service had been deployed to a standard Amazon Elastic Kubernetes Service (EKS) cluster, it would be served by an Elastic Load Balancer which would send incoming connections to our service’s node port on nodes with a live service pod. However, Google Cloud Platform (GCP) network load balancers only forward traffic to the targets on the same port as the incoming port on the load balancer, i.e., traffic to port 80 on the load balancer will be sent to port 80 on the target backend instance. The hello-world pods are definitely not listening on port 80 of the node. If we run netstat on the node, we see that no process is listening on that port. 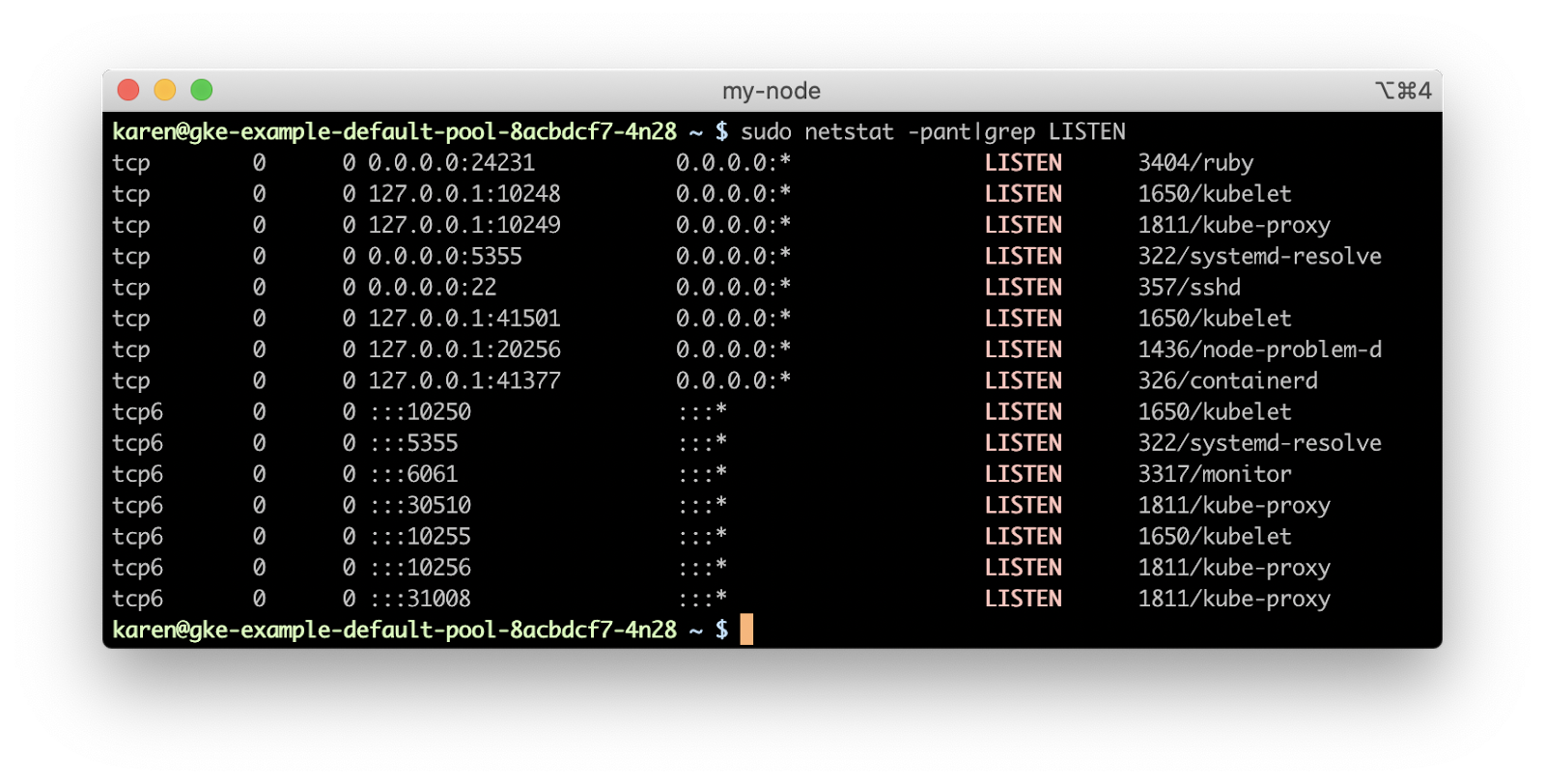 So how do requests through the load balancer make a successful connection? If kube-proxy were running in the user space mode, it would actually be proxying connections to backend pods. In iptables mode, though, kube-proxy configures Netfilter chains so the connection is routed directly to the backend container’s endpoint by the node’s kernel.

In our GKE cluster, if we log in to one of the nodes and run iptables, we can see these rules. 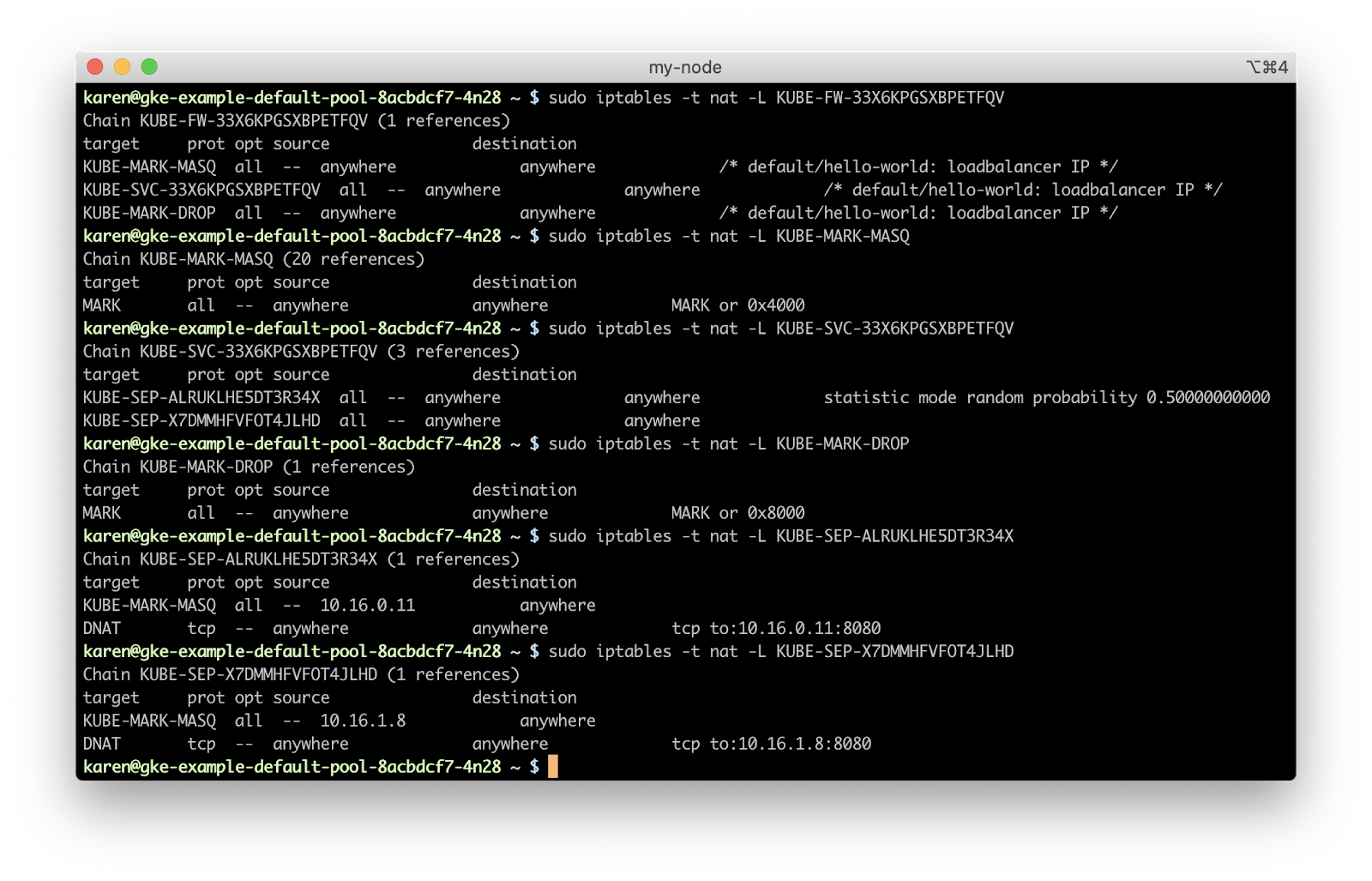 We can also visualize the chains and rules used in the network stack for evaluating and modifying the packet to see how the service we created in our cluster directs traffic to the replica set members.

The KUBE-FW-33X6KPGSXBPETFQV chain has three rules, each adding another chain for handling the packet.

Note that, even though our cluster has two nodes, each with a hello-world pod, this routing method shows no preference for routing to the pod on the node that receives the request from the cloud load balancer. If we change the externalTrafficPolicy in the service spec to Local, however, that would change. Not only would the request go to a pod on the node receiving the request, if one exists, but it also means a node without a service pod will refuse the connection. Therefore the Local policy generally needs to be used with Kubernetes daemon sets, which schedule a pod on each node in the cluster. While specifying local delivery would obviously reduce the mean network latency for requests, it can lead to uneven load across the service’s pods.

This post will not dive into details on pod networking, but in our GKE cluster, the pod network has its own CIDR block separate from the node’s network. The Kubernetes network model requires all pods in the cluster to be able to address each other directly, regardless of their host node. GKE clusters use the kubenet CNI, which creates network bridge interfaces to the pod network on each node, giving each node its own dedicated CIDR block of pod IP addresses to simplify allocation and routing. The Google Compute Engine (GCE) network can route this pod network traffic between VMs.

And this is how we get our HTTP 200 response code. 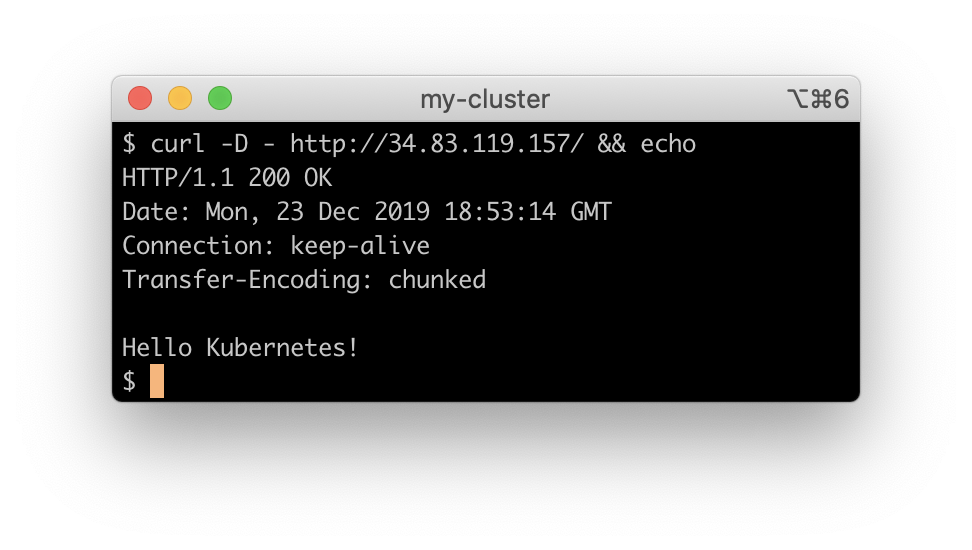 This post mentioned some of the ways different options offered by various Kubernetes platforms can change routing. Here is a non-comprehensive list:

The Kubernetes network requires a large number of moving pieces. It is quite complicated, but having a basic understanding of what is taking place in your cluster will help you more effectively monitor, secure, and protect it.

Original article can be found here.