Tech industry shipments are expected to suffer significantly for Q1 2020, due to the COVID-19 outbreak, a comprehensive analysis from TrendForce reveals. 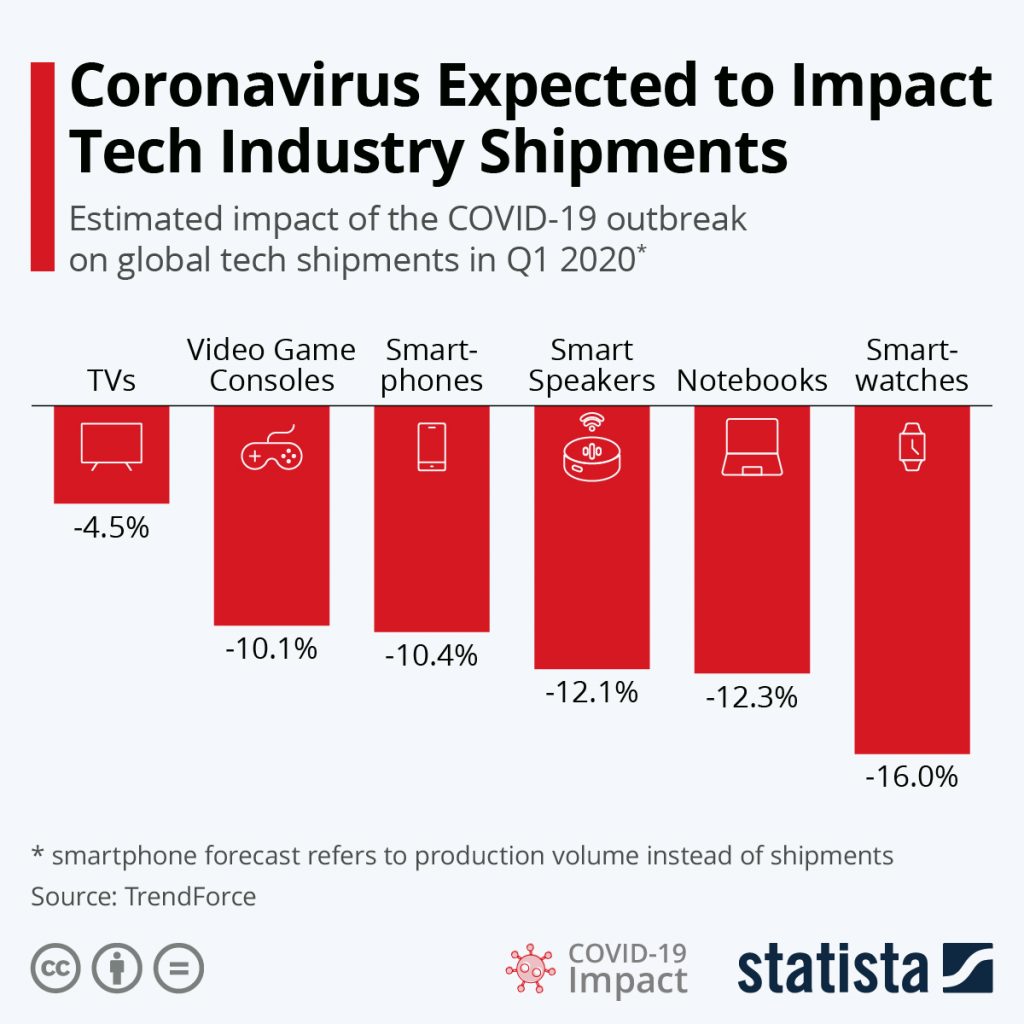 Using the COVID-19 data as of 14 February, Trendforce investigated the impact of the outbreak in various tech industries. Here’s what they found.

Industries where COVID-19 impacts the most

Smartwatch shipments are expected to suffer the most due to the virus outbreak. TrendForce projects the global shipments of smartwatches to decline by around 16 percent for the first quarter of 2020.

Another tech product which will suffer greatly would be notebooks, with an expected decline in shipments worldwide of about 12.3%. Smart speakers are projected to suffer a similar decline as notebook computers at a 12.1% decline.

As probably expected, smartphones will also be impacted by the outbreak, especially since major smartphone brands like Huawei, Oppo, Vivo, and Xiaomi are based in the epicentre, China. Even Apple, with a considerable market in China, expects to have some losses for the first quarter.

Trendforce predicts that smartphones will experience a decrease in production volume of around 10.4%.

The cause of decline

First, numerous companies assemble their products in China. With the country highly paralysed, it is only natural for their production to decline. Another reason would be the sizable market in China. Due to the outbreak, there is also an equivalent decrease in demand for tech products.

Lastly, some tech product manufacturers obtain their materials from China. Now that the operations in the country’s factories are slowed down, some materials might end up being unavailable.

We can see that from the production side up to the consumers’ end, the COVID-19 outbreak is causing some massive shocks.

According to TrendForce, the interconnectedness of the global economy results in the COVID-19 outbreak not only dragging down the GDP of the country but also the overall global economic activity.

This observation of TrendForce is highly applicable not only to the tech industries but also other domains. Because of this damage to the global economy,  TrendForce said that consumer purchasing power is also subsequently reduced.

“The pandemic not only negatively affected the production’s supply chain, but it also hurts China’s consumer confidence and reduces end-market demand in the short and long run, respectively,” TrendForce noted.

With this outbreak damaging the economy across all fronts, resilience will prove to be a challenge for the tech industry. With the outbreak recording more and more cases each day, this challenge would most likely persist even in the succeeding quarters.

If you want to know more about the impact of the COVID-19 outbreak in the tech industry, you should check out the TrendForce’s press release.