relay August 27, 2020
The practicality of quantum computing hangs on the integrity of the quantum bit, or qubit.

Qubits, the logic elements of quantum computers, are coherent two-level systems that represent quantum information. Each qubit has the strange ability to be in a quantum superposition, carrying aspects of both states simultaneously, enabling a quantum version of parallel computation. Quantum computers, if they can be scaled to accommodate many qubits on one processor, could be dizzyingly faster, and able to handle far more complex problems, than today’s conventional computers.

But that all depends on a qubit’s integrity, or how long it can operate before its superposition and the quantum information are lost — a process called decoherence, which ultimately limits the computer run-time. Superconducting qubits — a leading qubit modality today — have achieved exponential improvement in this key metric, from less than one nanosecond in 1999 to around 200 microseconds today for the best-performing devices.

But researchers at MIT, MIT Lincoln Laboratory, and Pacific Northwest National Laboratory (PNNL) have found that a qubit’s performance will soon hit a wall. In a paper published today in Nature, the team reports that the low-level, otherwise harmless background radiation that is emitted by trace elements in concrete walls and incoming cosmic rays are enough to cause decoherence in qubits. They found that this effect, if left unmitigated, will limit the performance of qubits to just a few milliseconds.

Given the rate at which scientists have been improving qubits, they may hit this radiation-induced wall in just a few years. To overcome this barrier, scientists will have to find ways to shield qubits — and any practical quantum computers — from low-level radiation, perhaps by building the computers underground or designing qubits that are tolerant to radiation’s effects.

“These decoherence mechanisms are like an onion, and we’ve been peeling back the layers for past 20 years, but there’s another layer that left unabated is going to limit us in a couple years, which is environmental radiation,” says William Oliver, associate professor of electrical engineering and computer science and Lincoln Laboratory Fellow at MIT. “This is an exciting result, because it motivates us to think of other ways to design qubits to get around this problem.”

The paper’s lead author is Antti Vepsäläinen, a postdoc in MIT’s Research Laboratory of Electronics.

“It is fascinating how sensitive superconducting qubits are to the weak radiation. Understanding these effects in our devices can also be helpful in other applications such as superconducting sensors used in astronomy,” Vepsäläinen says.

Superconducting qubits are electrical circuits made from superconducting materials. They comprise multitudes of paired electrons, known as Cooper pairs, that flow through the circuit without resistance and work together to maintain the qubit’s tenuous superposition state. If the circuit is heated or otherwise disrupted, electron pairs can split up into “quasiparticles,” causing decoherence in the qubit that limits its operation.

There are many sources of decoherence that could destabilize a qubit, such as fluctuating magnetic and electric fields, thermal energy, and even interference between qubits.

Scientists have long suspected that very low levels of radiation may have a similar destabilizing effect in qubits.

“I the last five years, the quality of superconducting qubits has become much better, and now we’re within a factor of 10 of where the effects of radiation are going to matter,” adds Kim, a technical staff member at MIT Lincoln Laboratory.

So Oliver and Formaggio teamed up to see how they might nail down the effect of low-level environmental radiation on qubits. As a neutrino physicist, Formaggio has expertise in designing experiments that shield against the smallest sources of radiation, to be able to see neutrinos and other hard-to-detect particles.

The team, working with collaborators at Lincoln Laboratory and PNNL, first had to design an experiment to calibrate the impact of known levels of radiation on superconducting qubit performance. To do this, they needed a known radioactive source — one which became less radioactive slowly enough to assess the impact at essentially constant radiation levels, yet quickly enough to assess a range of radiation levels within a few weeks, down to the level of background radiation.

The group chose to irradiate a foil of high purity copper. When exposed to a high flux of neutrons, copper produces copious amounts of copper-64, an unstable isotope with exactly the desired properties.

“Copper just absorbs neutrons like a sponge,” says Formaggio, who worked with operators at MIT’s Nuclear Reactor Laboratory to irradiate two small disks of copper for several minutes. They then placed one of the disks next to the superconducting qubits in a dilution refrigerator in Oliver’s lab on campus. At temperatures about 200 times colder than outer space, they measured the impact of the copper’s radioactivity on qubits’ coherence while the radioactivity decreased — down toward environmental background levels.

The radioactivity of the second disk was measured at room temperature as a gauge for the levels hitting the qubit. Through these measurements and related simulations, the team understood the relation between radiation levels and qubit performance, one that could be used to infer the effect of naturally occurring environmental radiation. Based on these measurements, the qubit coherence time would be limited to about 4 milliseconds.

The team then removed the radioactive source and proceeded to demonstrate that shielding the qubits from the environmental radiation improves the coherence time. To do this, the researchers built a 2-ton wall of lead bricks that could be raised and lowered on a scissor lift, to either shield or expose the refrigerator to surrounding radiation.

“We built a little castle around this fridge,” Oliver says.

Every 10 minutes, and over several weeks, students in Oliver’s lab alternated pushing a button to either lift or lower the wall, as a detector measured the qubits’ integrity, or “relaxation rate,” a measure of how the environmental radiation impacts the qubit, with and without the shield. By comparing the two results, they effectively extracted the impact attributed to environmental radiation, confirming the 4 millisecond prediction and demonstrating that shielding improved qubit performance.

“Cosmic ray radiation is hard to get rid of,” Formaggio says. “It’s very penetrating, and goes right through everything like a jet stream. If you go underground, that gets less and less. It’s probably not necessary to build quantum computers deep underground, like neutrino experiments, but maybe deep basement facilities could probably get qubits operating at improved levels.”

Going underground isn’t the only option, and Oliver has ideas for how to design quantum computing devices that still work in the face of background radiation.

“If we want to build an industry, we’d likely prefer to mitigate the effects of radiation above ground,” Oliver says. “We can think about designing qubits in a way that makes them ‘rad-hard,’ and less sensitive to quasiparticles, or design traps for quasiparticles so that even if they’re constantly being generated by radiation, they can flow away from the qubit. So it’s definitely not game-over, it’s just the next layer of the onion we need to address.” 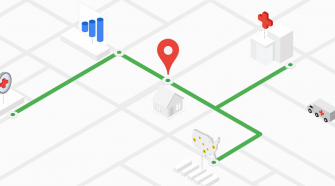 How Google Maps Platform Partners Are Responding To COVID-19