Protect against unexpected and unwelcome surprises by using venv in Python.

If you’ve ever shared a neat computer trick, a complex application, or something in between with a friend, then you’ve probably uttered the phrase, “Well, it works on my computer.” No matter how advanced computers become, there seem to be recurrent problems related to the differences in what any two machines have configured or installed. There are ongoing attempts to solve this, and for Python developers, one of the best ways to prevent it is to use virtual environments.

Without a virtual environment, when you type python or python3 into your terminal, you’re launching whatever version of Python is installed on your computer:

On Monday, this might be version X, but on Tuesday, it could suddenly be Python Y, should you happen to update your computer overnight. Quite often, that’s not a problem because Python tends to be good at backward compatibility. However, some computers retain very old versions of Python in the interest of legacy support, and some developers write on the cutting edge in their eagerness to use the newest features of the language. This can cause unexpected problems.

The same problem extends to individual Python modules. You might install version Z of the ExamplePyMod module, develop your code, and post your application online. Should someone who installed version X or Y of ExamplePyMod a year ago try to run your code, unexpected compatibility issues could arise. It’s also a common problem for developers to take a module for granted. If you use a module so frequently that you practically think of that module as part of Python, then you’re likely to forget to add the module as a requirement for running your application.

In both cases, for you to find the root cause of errors, you’d have to audit and update your system or the user’s system so that you’re both running the same versions of everything involved.

For example, here’s a virtual environment created with Python 3.7:

Using modules in a virtual environment 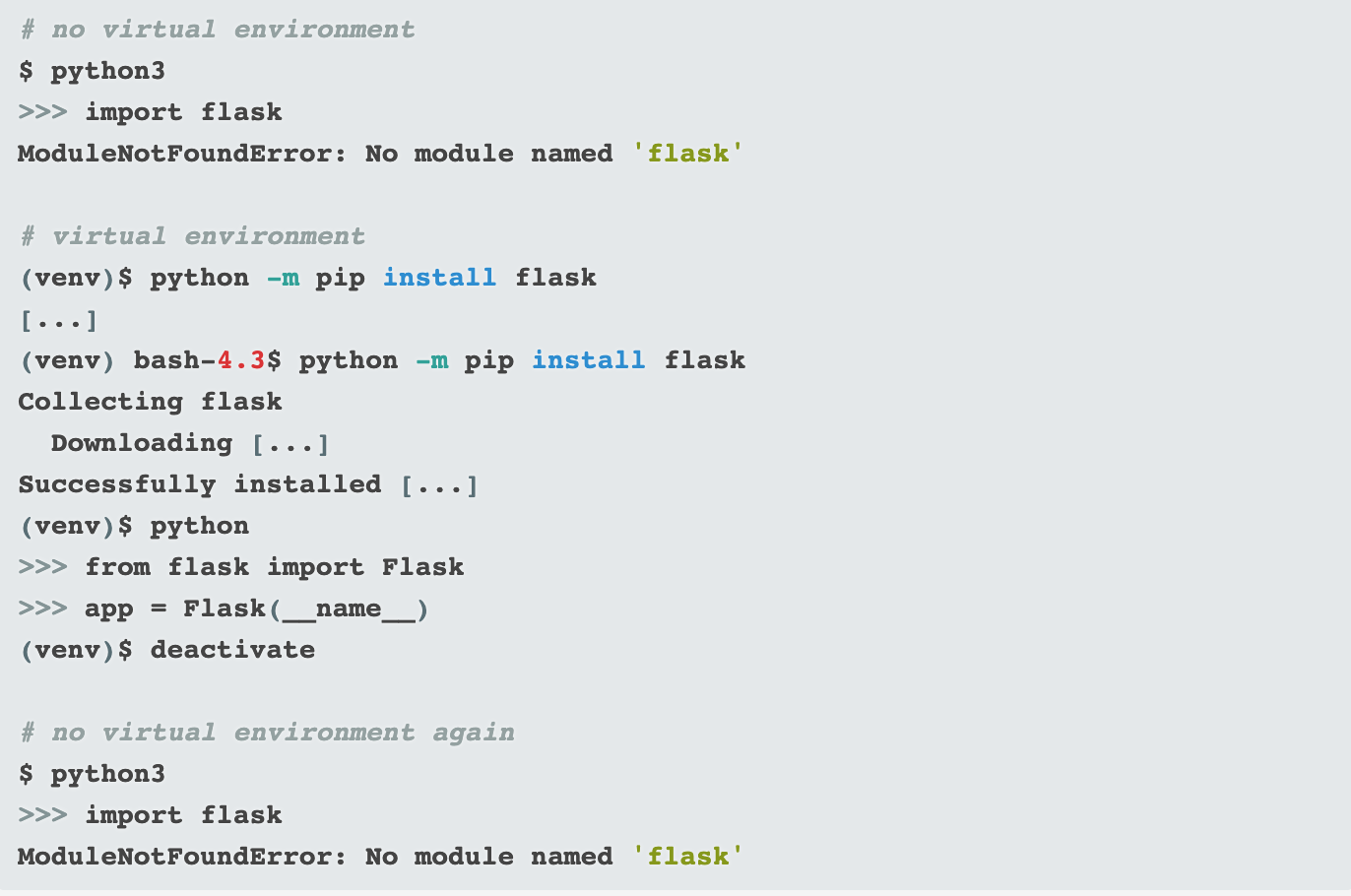 Restoring a virtual environment with pip

It might seem like a lot of extra work for you to install and reinstall your required modules every time you sit down to hack on code. Actually, the virtual environment system encourages you to keep track of the modules you’re using in a requirements.txt file within your project directory. You can process requirements.txt with pip to handle automated installs of all dependencies:

Python also caches required modules, so you’re up and running in no time.

For a complete overview of pip and its abilities, download Moshe Zadka’s pip cheatsheet.

The command to create a virtual environment on Python is:

To activate a virtual environment:

To deactivate a virtual environment:

Virtual environments are an important part of the Python development process. Learn to use them to protect yourself and your users from unexpected and unwelcome surprises. In short, use virtual environments so you can spend more time coding and less time debugging!

This article is republished from OpenSource by Seth Kenlon.

Next The Cloud Trust Paradox: To Trust Cloud Computing More, You Need The Ability To Trust It Less

How To Install scikit-learn

What Was Observability Again?