It is really funny to notice that, more often than not, we only hear the good stories in each segment of our lives. That applies equally to Hollywood, where we only get to see the shining stars, but ignore the struggle that goes behind it, or any successful Agile project, where we see and relish the success, forgetting the relentless effort by a dedicated team. Does success cover the entire story? Of course not! There is a very dark side as well — which is often not too exciting to hear or encouraging to know — but very insightful if you wish to learn what not to do to avoid failure.

It is repeatedly presented that only 42% of Agile projects succeed in truly being Agile. The other 58% struggle (50%) or fail (8%)! So, what are they doing differently that keeps them from success with Agile? This is interesting to know — as doing or being Agile, may sound different, but in reality, they are very closely-related, only differed by the span of its usage.

Let’s look at the top reasons for failure. I could largely categorise them in four buckets, which I lovingly call PA-SA-WAKA-DA.

This is when a traditional organization attempts to try their luck with Agile. In most cases, they will get a few of the employees certified in some of the market-popular scaling frameworks and those employees, in turn, will try their best to introduce and implement an Agile way of working in the organization. Such efforts are mostly hollow in nature, as these are kind of a “show off” attempt towards assuring customers that they, too, are doing Agile! But it simply doesn’t work. It generally lacks seriousness, is driven from the top and traditional roles hide behind Agile pseudonyms.

Have you come across teams which perform a daily huddle and proudly raise the flag of “Agile” on their ship? This is an example of whatt I mean by superficial Agile. The good part is, they generally know that they are not exactly doing Agile (though it doesn’t stop them from boasting their “Fr-Agile” spirit). Unfortunately, it doesn’t take them anywhere. If you don’t wish to do Agile and you think you are good in the traditional approach, take that approach wholeheartedly rather than trying to do Agile with zero morale.

In today’s world we have a HUGE pool of Agile leaders and evangelists. However, it’s a different story when you examine how many have really does enough ground work to earn those titles. But they are there and many times, the honor of leading an Agile rollout is bestowed on them. Those with enough on-ground experience will hopefully do a good job. But others will only play the role of a sidekick to the team on the ground, contributing little more than comments, which in most cases don’t add any value.

In my experience, I have met such fellows who very proudly claimed they also knew Agile and as a first step to help a steady Agile project, introduced two new meetings (each around 1-1.5 hours) per week to hear about the problems of the developers. How Agile!

This is the oldest of the lot. This is where you get a directive from the top to “Do Agile,” without any support in terms of budget or autonomy. It’s basically an ask to deliver everything just the same, but package it as “Agile.” Quite clearly, this is no one’s gain (well, apart from the fact the top leadership could claim that the team on the ground is doing Agile, as that was the instruction given to them).

In all these scenarios, the flow of failure is quite similar. They try, they suffer, then in futile attempts to cope with the pressure of expectation, their delivery suffers low quality and failed timelines. Eventually, by the time senior management comes in, it is too late to recover and who gets the blame? Agile, of course! It’s of no use! And therein lies the struggling 58%.

To succeed with Agile — you don’t need to read large books or get a Ph.D. All you need is common sense! Ensure you communicate and collaborate clearly with your team and tools such as Backlog by Nulab can help you achieve that. Take a glance at the Manifesto and if that excites you, study the Scrum Guide! Lastly, keep an open mind! Life isn’t that complex, unless we wish to entangle it in complexity!

Next What Is Internet Of Things? How Does It Work?

Learn Why And How To Migrate Monolithic Workloads To Containers

Google Cloud’s Security And Resiliency Measures For Customers And Partners

Boo! Fight Off Your Scariest Cloud Monsters With Active Assist 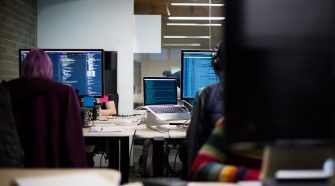