SlashData’s latest Developer Nation report looks at the popularity of programming languages and trends from the global developer community.

JavaScript is now used by more than 16.4 million developers globally, says a survey of more than 19,000 coders – making it the world’s most popular programming language “by a wide margin”.

The report also looked at developer involvement in 5G and IoT, specifically how programmers were taking advantage of new advances in technology in tools, apps and services.

JavaScript’s ongoing popularity in web and backend applications supported its position as the most popular programming language in Q3 2021. While not necessarily a surprise in itself – JavaScript has, after all, been the world’s most-used language for a number of years now – SlashData found that upwards of 2.5 million developers had joined the JavaScript community in the past six months alone. That’s the same as the entire user base of Swift; or, the combined communities of Rust and Ruby.

Python might not be a close second, but its popularity is impressive nonetheless: according to SlashData, the language is now used by some 11.3 million coders, primarily within data science and machine learning, and IoT applications.

The brainchild of Guido van Rossum, Python’s popularity has exploded in recent years, overtaking that of Java, which is currently used by 9.6m developers. Java remains a go-to for mobile and desktop apps, SlashData’s survey found.

According to SlashData, Python added 2.3m developers to its community in the past 12 months. “That’s a 25% growth rate, one of the highest across all the large programming language communities of more than 7M users,” the report noted.

“The rise of data science and machine learning (ML) is a clear factor in Python’s popularity. More than 70% of ML developers and data scientists report using Python. For perspective, only 17% use R, the other language often associated with data science.”

Of course, determining the developer base of any particular programming language is not an exact science. “It can be hard to assess how widely used a programming language is,” noted SlashData. Its figures are based on two pieces of data: the organization’s own estimate of the number of software developers worldwide (which it puts at 26.8 million), as well as its bi-yearly surveys, which SlashData said reach “tens of thousands of developers every six months”. So, there is some margin for error.

Rounding out the top five most popular languages were C/C++ (7.5m developers), PHP (7.3m) and C# (7.1m). Of these, PHP has grown the fastest over the past six months, SlashData reported, acquiring one million new developers between Q1 and Q3. Like JavaScript, PHP remains popular for Web and backend applications.

“Rust has formed a very strong community of developers who care about performance, memory safety, and security. As a result, it grew faster than any other language in the past 24 months, nearly tripling in size from just 0.4M developers in Q3 2019 to 1.1M,” the report read.

SlashData’s report found that developers are increasingly getting involved in 5G projects, particularly those related to IoT, AR/VR, consumer electronics, and machine learning/AI.

Perhaps unsurprisingly, China was found to be the epicentre of 5G developer activity: 13% of respondents based in China reported they were actively working on 5G projects, which SlashData said was almost double the global average.

North and South America followed, with 11% and 10% respectively. Despite this, the report found that 43% of developers in North America had no interest or involvement in 5G – higher than the global average of 35%.

SlashData’s latest report also aimed to take the pulse on developer sentiment amid changing workforce dynamics and a tech-hiring market in flux.

Specifically, it asked developers what would prompt them to leave their current employer for a job elsewhere. Half of developers (50%) said they would change company for better pay, although a third of respondents weren’t financially motivated, opting for motivations such as career advancement (31%), broadening knowledge or skills (31%), the ability to work remotely (22%) and better company culture (20%).

Developers in Eastern Europe were most likely to prioritise increasing their salary – nearly seven in 10 said a better offer would prompt them to switch jobs. Compensation was also important for Chinese developers, with three in five saying better pay would make them switch.

Experienced developers were found to be the most content in their jobs – around one in six of those with 16 or more years of experience said nothing would make them change jobs. Career advancement and taking on a more challenging role both peak for developers with three to five years under their belts, the survey found.

“There are many reasons a developer may choose to switch employers, and whilst it’s important to ignore the impact of compensation, other factors play an important role, especially as the role of work in our lives continues to evolve,” it said.

“For those concerned with hiring and retaining developers, money talks, but it’s not the only topic of conversation.”

This feature was originally apppeared in ZDNet.

Olympic Broadcasting In The Cloud Delivers Efficiency, Innovation And Inclusiveness 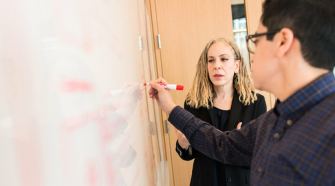