Easing In To Easing Curves In Jetpack Compose

Learn how to create and use custom easing functions in Compose

Everything that moves, accelerates, or decelerates — nothing starts or stops moving instantaneously. The ball you bounce on a floor hits the ground and then bounces back up again and eventually comes to a resting position after a few smaller bounces. A train door closes slowly as it reaches its destination. An easing function defines this acceleration or deceleration. Once you learn about easing functions you’ll start to notice easing functions all around you, and sometimes you won’t be able to see the world normally again (okay, maybe that’s just me).

What is an easing function?

Analogous to Interpolators from the View system, an Easing function in Compose is a way to describe the rate of change, let’s say y over time (which is usually represented on a graph as x) . The function maps the input (fraction of the animation duration) from 0 to 1.

The interface for implementing easing functions in Compose is as follows:

It passes in a fraction — between 0 and 1, and maps it to a new value as the result of applying the transformation. So the simplest example is to implement a Linear easing function:

In the example below the input fraction represents progress over time (time being the x axis). The linear mapping would return that same progress value, therefore the rate of change is constant over time:

However, rarely does a linear easing function look the best for animations — as most things in life don’t move linearly, gravity almost always affects how objects move. Sure, linear easing is way better than not having any animation at all, but it doesn’t look nearly as fluid as curves that ease over time.

Implementing your own Easing Function

This looks simple enough! But what is CubicBezierEasing? Before we get into that, let’s learn a bit of theory about Bézier curves in general.

What is a Bézier curve? 🤔

A Bézier curve is a parametric curve controlled by a set of control points. These control points determine the shape of the curve. You’ve probably seen a Bézier curve without realizing it — if you’ve tried to draw vector art by creating points and lines are created between them — this is a usage of Bézier curves. They offer a way to get smooth transitions between points — through a mathematical formula.

How do Bézier curves work?

We can start a Bézier curve with two points — p0 and p1, connected by a line. If we introduce a third point P between these two points, the position of P is described by what is called a t value — a value between 0 and 1 (or a fraction).

Adding another point to our sample, we have p0, p1, and p2. We now have two interpolated points, moving on their lines based on the same t value. After connecting these two points with another line, and if we add another point on that line that also moves based on the same t-value. This follows a very specific path which is known as a quadratic Bézier curve path. You can keep adding points to get more complicated curves, but the same formula will still apply.

What is a cubic Bézier curve?

A cubic Bézier curve follows the same pattern as above, but it takes in 4 (p0, p1, p2, p3) points to produce a curve (hence the cubic name). The shape of the curve is determined by the control points p1 and p2.

For example the EaseInOut function can be easily defined in the following way:

The points mapped that make up the easing curve look as follows:

Some easing functions don’t need to use cubic Bézier curves and instead transform the value using specified formulas, like the ease out bounce function.

This is an example of implementing the EaseOutBounce easing function (taken from easings.net):

This will produce the following easing curve:

We can also build our own custom easing curve using cubic-bezier.com — tweaking it to our heart’s desire.

How can I use a Custom Easing Function with my Compose Animations?

Show me the difference!

Consider the Crane calendar selection animation, we can set the easing curve of the whole animation to an EaseOutQuart:

Here is a side-by-side comparison of the animation with different easing curves, you can see that using the Linear vs. custom-defined EaseOutQuart easing function produces two very different looking animations. The ease out animation is smoother and feels more fluid, whereas the linear one feels very structured and is not very natural looking.

Linear Easing — same consistent speed throughout the whole animation, the ending is abrupt, vs EaseOutQuart — slows down towards the end, a much smoother ending:

That’s all for now — I hope you’ll be looking at everyday objects to try to figure out what easing function they are using.

If you have any questions, feel free to reach out to me on Twitter @riggaroo.

Thanks to Doris Liu, Nick Butcher and Ben Trengrove for the feedback and reviews on this post.

Next How Garbage Collection Works Inside A Java Virtual Machine

5 Examples Of Metrics Or Log Data That Drives Observability 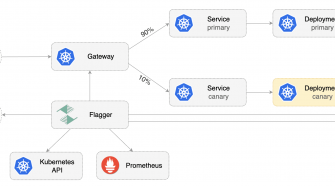