Welcome back to the Paging 3.0 MAD Skills series! In the previous article, we went over the Paging library, saw how it fits into the app’s architecture, and we integrated it into the data layer of the app. We did this using a PagingSource to fetch our data, and then used it, along with a PagingConfig to create a Pager object that provided a Flow<PagingData> for UI consumption. In this article I’ll be covering how to actually consume the Flow<PagingData> in your UI.

Preparing PagingData for the UI

The app currently has the ViewModel exposing the information needed to render the UI in the UiState data class, which contains a searchResult field; an in-memory cache for result searches that survives configuration changes.

A private method “searchRepo()” is added to the ViewModel, which calls the Repository to provide a PagingData Flow from the Pager. We can then call this method to create our Flow<PagingData<Repo>> based on the search terms the user enters. We also make use of the cachedIn operator on the resulting PagingData Flow which caches it for quicker reuse using the ViewModelScope.

With the Flows that comprise the fields of the UiState fully defined, we can combine them into a StateFlow of UiState, which can then be exposed to, and consumed by the UI alongside the Flow of PagingData. With the above, we are now ready to start consuming our Flows in the UI.

Consuming PagingData in the UI

Next, we start to collect from the PagingData Flow, so we can bind its emissions to the PagingDataAdapter using the submitData suspending function.

Also, as a user experience perk, we want to make sure that when the user searches for something new, they are taken to the top of the list to show the first search results. We want to do this when we’re confident when we’ve finished loading and have presented data in the UI. We achieve this by taking advantage of the loadStateFlow exposed by the PagingDataAdapter and the “hasNotScrolledForCurrentSearch’’ field in the UiState used for tracking if the user has manually scrolled the list themselves. The combination of these two creates a flag to let us know if we can trigger an auto scroll.

Since the load states provided by the loadStateFlow are synchronous with what is displayed in the UI, we can confidently scroll to the top of the list once the load state flow notifies us we are not loading for each new query.

The arguments of the withLoadStateHeaderAndFooter function take definitions of LoadStateAdapters for both the header and footer. The LoadStateAdapter’s in turn host their own ViewHolders, which are bound with the latest load state making it easy to define the behavior of the views. We can even pass arguments to let us retry loading in case there’s an error, which I’ll cover more in the next article.

With that we’ve bound our paging data to the UI! For a quick recap, we:

Thanks for reading along! Stay tuned, and see you in the next one where we’ll be looking at Paging from the database as a single source of truth, and taking a closer look at the LoadStateFlow!

Next Apply Special Effects To Images With The CameraX Extensions API

Cloud Computing In A Nutshell 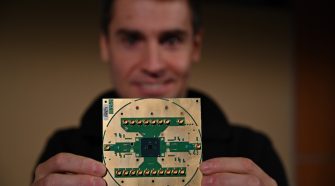