While the tech industry is no stranger to dealing with rapid change, we’ve never faced a challenge like this. But amid the disruption, we’re seeing a silver lining emerge: the world is in this together, and people are reaching out to one another like never before.

The gaming community is no exception. As it continues to grapple with the current situation, developers from the Asia-Pacific region — who have been dealing with this crisis the longest — stepped up to offer their advice on game development, operations, and new working norms under these new circumstances.

#1: Employees are your biggest asset, so take care of them

First and most importantly, you want your employees to stay healthy and well. While most companies have deployed some level of work-from-home measures, some developers went the extra mile.

NetEase Games (Greater China) used mobile apps such as Daily Health, where employees could report any viral symptoms. They also ran a 24-hour hotline where employees, interns, and their families could talk to psychologists and consultants, and offered online courses on managing emotions during a turbulent time.

Devsisters (Korea) distributed care packages to their staff with hand sanitizer, wet wipes, vitamins, and masks. The gesture led to a boost in employee morale and encouraged them to persevere together.

#2: Deploy processes and tools to ensure all functional teams stay in sync

When employees work from home, it’s both critical and difficult to keep your game design, software development, and art production teams in sync. Many developers adopted tools to track tasks and aid real-time communication.

Kooapps (Southeast Asia) relied more heavily on their project management team and tools like Asana to keep everyone up to speed on project deliverables, deadlines, and their status. Information that used to be informally disseminated through casual, in-person conversation is now formally documented and digitally accessible by any employee.

#3: Be creative about gathering user feedback

Collecting user feedback in the development phase is an essential part of game development, but COVID-19 has made it challenging to conduct any kind of user testing on-site or at conferences.

Kooapps, which previously only gathered feedback offline, quickly transitioned online and subscribed to services such as PlaytestCloud to conduct in-depth user testing sessions.

#4: Use the delay to improve quality

Treat roadshow cancellations and delays as an opportunity for longer game preparation periods.

NetEase Games was rushing to prepare a game demo update for a GDC media event, but when the event was cancelled, they used the extra time to enhance the overall quality of their game demo.

#5: Add a buffer for game launches

Working from home can affect your operational capacity, causing delays both internally and with stakeholders involved in the launch process.

Kooapps planned a one-week buffer around the launch of Stacky Bird to account for unexpected delays, such as longer app reviews and marketing partners requiring longer lead times to set up and execute campaigns. They also planned for longer internal QA testing times, as no single individual in the team has access to all the devices required for QA testing at home. The process necessarily takes longer than when the team works together in one office with their full repository of testing devices.

Many developers had to scrap their original plans and scramble to adjust their LiveOps plans.

PUBG (Korea) had made offline plans for the global anniversary of PUBG Mobile in Korea and Japan, but had to effectively cancel their scheduled offline events and direct their promotions online. They focused on what they could do during this crisis and users rewarded them for their efforts.

Kooapps observed that users were spending more time playing games while confined to their homes. As a result, they modified their LiveOps events to run longer and require longer play sessions to complete tasks and quests. They also ran special LiveOps events to support COVID-19 relief.

Work capacity constraints may impact the quality of your LiveOps and require proactive user communication.

XFLAG(Japan) posted on its official website that the character voice quality of their upcoming Monster Strike update might not be up to their usual standards and asked users for their understanding. They explained that voice assets had been recorded outside the studio so the quality could not be guaranteed. They also committed to replacing any voice assets with quality concerns once the crisis had passed.

The new-norm and looking to a new world

Many developers in Asia-Pacific have returned to the office but have implemented measures to stay efficient while keeping office capacity limited.

NEXON (Korea) considered several options to ensure the health and safety of their employees while maintaining work efficiency. After much consideration, they decided to give each team discretion to set their own schedules based on workload and urgency, while recommending that each team reduce population density to 60% capacity to accommodate for social distancing. They implemented a “three-day office and two-day home” policy that sets each team’s working days in consideration of project schedules.

#9: Provide employee assistance in the transition back

You employees may be affected to varying degrees. Certain measures can help them safely return to work.

Kooapps provided employees with temporary housing close to the office, personal mobility devices like bicycles, and personal protective equipment to enable employees to return to the office safely and easily.

With a few adjustments to your schedule, communications, and expectations, you can help keep your business strong and your users happy.

Next Which Kubernetes Certification Is Right For You?

How To Package Your Python Code 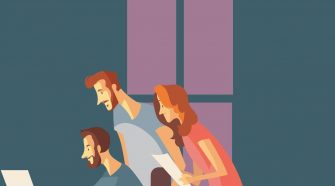 PyCon 2019 | How to engage Python contributors in the long term? Tech is easy, people are hard.